The dictionary of the european language

And This is how the Dictionary Came into Being:

Applying now the phonological-orthographic europeanisms to the lexical and morphological europeanisms, taking into account the formal europeanisms, reveals something surprising, which accompanies everyday lives of people from the Atlantic to the Urals: European language.

The advantage of a common lexicography is that, to a certain degree, it informs about all the languages of Europe simultaneously. Only after that one has to specialize in an individual language, which is then much easier. Namely by one to two thirds easier.

The peculiarity of the EuroLSJ procedure is that european language material is collected with the utmost respect for each individual language. The aim of the procedure is to represent ALL languages of Europe as strongly as possible.

So far, the dictionary exists only in German. But actually this does not have to irritate you: the content of the dictionary is at 90% language-neutral; The grammar consists mainly of tables that are labeled in international terms. In addition, you will find translations of the usage words into English in the word list above. That means: If you are interested in the dictionary now, also the German edition can already offer you a lot!

Example of a national edition of the dictionary of the european language: 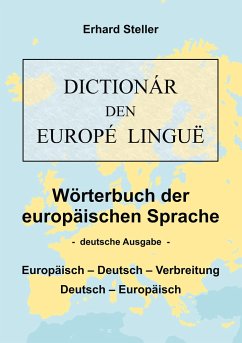 European is a complete language, even though only a small part of it is documented here. For every word and every rule that belongs to a language according to european customs, there is a maximum-european form.

What is described in this dictionary has an average spread of 390 million speakers in Europe, for whom it is part of the mother tongue in 18 national variants.

On the following pages you can look into the book: