Activities within the EuroLSJ Project

The dictionary of the european language was published in early June 2018 (paper and e-book) in the first national language edition (German).

Further Plans for the Dictionary

There is great music in every language of Europe. It‘s a pity that it's not made known throughout the continent (e.g. by radio)! The artists are missing out on endless opportunities to become rich and famous! All the more interesting is that they will not be put off: at the Eurovision Song Contest of 2018, the trend was clearly towards the native language of the artists. Also the Youtube channel EuroLSJ wants to contribute some little help to this.

There you can find music in many european languages with original lyrics, as well as a playlist - certainly the most entertaining way to get to know the languages of Europe, in spelling as well as pronunciation! And for artists certainly the most sustainable way of being successful across Europe without having to give up their authenticity.

The lyrics visualization video of the song Malování from the Band Divokej Bill is one of the few in-house productions of EuroLSJ on the channel, but an example of what is possible when combining good quality music with good visualization: Three million clicks to the video have brought this rock-song in czech language to a European platform. This is how Europe works! 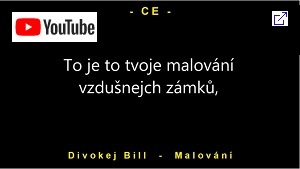 And This is how Lyrics Can Be Understood:

Enter the title + "Lyrics" into a search engine, select a page from the results list, copy the text from there into a translation program and have it displayed in your native language.

The protection of copyright is important. However, this may make it harder for Europeans to present music to each other in their language: it requires the artists' permission for their works to be used. Fortunately, they also have therefrom the advantage, that they can become known throughout Europe.

The EuroLSJ project has been presented in German, Italian, English and Russian at linguistics-conferences and congresses at universities and academies, p. e. in Lisbon, Rome, Heidelberg, Zadar, Moscow and Strasbourg.

EuroLSJ is the invitation to a change of perspective that leads to more clarity and overview. An entertaining performance with many pictures and examples from everyday's life makes a presentation of the project and eurolinguistics an inspirational enrichment for every meeting.

Should One Use European Language Directly?

We all speak European as soon as we open our mouths. This is the central message of the EuroLSJ project. In the foreground is therefore the description of something existing.

However, this does not mean that european language material cannot be made accessible in any other way than just by listing in a dictionary. Because:

For both the direct encounter with european language-material provides the strongest experience. Additionally:

So, if you have a public presence and use multilingual clues or labels, then it's definitely an advantage for you to add European to your language repertory.