Back to the language selection - www.EuroLSJ.eu

EuroLSJ (pronounced "Euro L. S. J.") is an initiative which is aimed at making Europeans familiar with each other's languages.

Luckily, this is easier than the large number of national dictionaries might initially suggest. Thanks to a common cultural history, the languages of Europe form a large network.

The Natural Network of European Languages 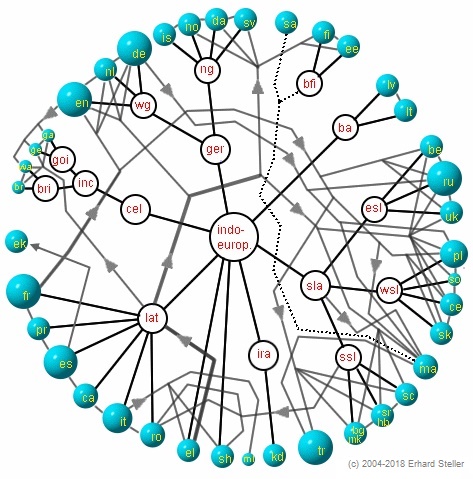 The languages (in the graphic the blue spheres) are connected with each other not only in many cases by kinship (black lines with red labeled circles), but also by the linguistic traces of innvoations, trends and dominions that influenced Europe since 2000 years (gray lines with arrows).

While the classic language description that we know from national dictionaries regards each european language (L1, L2, ... Ln) for itself and documents its elements (E1, E2, ... En), the eurolinguistic view focuses on commonalities between them. Reality is thus viewed from a perspective (camera 2), which is, so to speak, rotated 90 degrees relative to the previous perspective (camera 1) (yellow arrow). What can be seen from the eurolinguistic perspective is, in the context of the EuroLSJ project, in each case brought to a common denominator, in which the individual variants are optimally recognizable (L).

The Dictionary of the European Language

The conclusion from all similarities in spelling, vocabulary and grammar is: We all (also) speak a common european language as mother tongue; as far as that is the case, it is possible to describe all the languages of Europe at once. For the linguistic reality of Europe has not only a diversity aspect, but also an aspect of unity. Unity makes diversity accessible to everyone without having to be a linguistic genius. More about this under “Dictionary”.

European pop music in the national languages: also a way to get to know each other - the languages and pop music. And for artists a chance to get known throughout Europe. We should finally use that chance. How this could be done is shown on the

Youtube channel EuroLSJ. In addition, the EuroLSJ project has already been presented in several countries and languages at universities. Information about this and other plans, including the dictionary, under “Activities”.

Is european language something like Esperanto? And why is not its relevance diminished by the spread of English? The most common and important questions that have been asked about the EuroLSJ project so far are answered under “Questions”.